St. Dymphna, Pray for Me

Saturday, May 16, 2009: I’ve worked since I was 7, at my Aunt Zoe Borcher’s “Canoe Inn” livery (and later, fine dining) at Stephan’s Bridge in Grayling, MI. I’ve worked for the Catholic church since I was 11. I am 60. It has been a long and tangled relationship for us both.

Receiving the news from my bone doctor, following a fall (Fall, 2008) from the 2nd step of my stairs, I bravely said I was ready (physically, after the surgeries and physical therapy) to come back to work. Oh. I was soo not ready. In denial about encroaching scar tissue from a closed head injury, it was not my leg, fibia nor knee that impeded me from going back to work. No. It was the concussion I had received during that time. My 3rd since the life altering accident on Cinco de Mayo in Phoenix, when a woman on her cell phone ran a red light, and T-boned me, spinning me out of this hemisphere, and impacting me – yet – to this day.

I couldn’t read, nor recognize numbers. I was a software technician for a Catholic software company. If I could not do my job, I would lose it. My co-workers saved me. And DOS, bless her heart. By memory, I could assemble the issue. “Touch, F, S, and select G, general census”, I would say. When it became more intricate than that my cubicle pals would come up and wave at me and say “transfer it” to them. The monitor to me was so frightening. But Paul and Stacy and Bruce and Joe/Lupe/Karen would swoop in, take those calls and no one knew the difference. To you all, without you I could not have survived. And to Nick, whose wild 14 year old driver’s license brought me to work each day. (You know you loved waiting in the receptionist’ room, oglng Teresa!!)

By being proud, and fearful of losing my job if my disability was more than my right leg, but my left hemisphere, I lost my job at the diocese. I could not perform it any more. (My pride went before my ‘fall’ you could say.)

Today, thinking I could ‘pay it forward’ to those who have been kind to me, and that I could make a living from it from my veranda, I created my Campbell’s soup bouquets. Confident that owner’s of the economy defying village of DeWitt merchants, I saddled up my used Amazon box, filled with small bouquets in soup cans, olive jars, wine bottles, and walked down to propose my dream. Would they be interested in accepting my gift and let me know when I replaced it next week, and how customers viewed these humble offerings. My first stop was the DeWitt Pharmacy, which highlights works about DeWitt, local artists, and folklore of the region. Confident, I gave them my Campbell’s soup bouquet.

“Would you be willing to just accept this gift of appreciation for all the kindnesses you have afforded me, as I recuperate from a difficult time in my life?”, I said. “I am unemployed and disabled and want to test this market. I am not asking you to sell this, I just want your customer’s reactions seeing it. In fact, if someone comes in – really down – please, give this to them. Call me, and I will replace it.”

They said “No.” No? Not paying it forward, nada.

Sam’s resturant said ‘yes’, the IGA party store said ‘yes’ and called me – this same day – to pick up the cans, wine y liquor bottles they were collecting for me. And I replaced their flowers. They gave them to someone who was going to buy a bottle of liquor to drown the shame of unemployment, but took the “Mario Olives” bouquet instead.

Thank you, Jesus, for walking with me on a long, arduous journey of one. 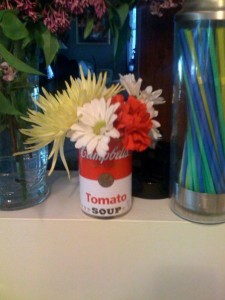 Try the Chicken Noodle if your soul has a cold. Very nice. (Pick out the flowers tho’) ;o) 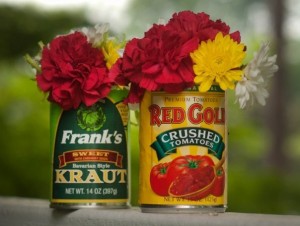 Finding something beautiful in what we would cast off, isn’t that what we all are called to do?

Permanent link to this article: https://vickisvoice.tv/2009/05/today-i-took-a-bouquet-of-my-humility-to-the-village-of-dewitt/