I Was Young and Good, but Maybe Not All That Wise

St. Dymphna, Pray for Me

Friday, May 15, 2009: One day, when I was 30, I saw a dear old man in front of the grocery store looking around for something. I went over to him and asked if I could help. He said he’d lost his car keys and had looked every where, retracing his steps. I walked over to the car door, and handed him the keys he’d left in the lock. Chagrined, he asked how I knew to look there. “I do that all the time,” I replied. How old are you, he asked. I told him, and he said “Wow, I’m 87 but you’re really going to be a mess!!”

He was right. Now, it’s not the keys but playing hide and seek with my car. My SUV, all white, big. Silly Mazda. It appears somehow it moved itself from the front parking lot to the back parking lot. And, it likes airport parking immensely. Particulary in Detroit, where I get hours of enjoyment going back into the baggage claim area, with both hands full of luggage, equipment and things drug (?) from the last convention. Detroit’s motto should be: “Heed where you park. Note on your stub ‘you cannot get there from here’.

Dymphna, you are still stuck with me, aren’t you? I knew it. 100 years ago, while setting up for mass, I looked in the trash and here was a plaster of paris statue. Intrigued I pulled her out, and at the base was her name, Dymphna. I was smitten. I dragged her to my 2nd job, at a real estate office.

I was working at Century 21 in Grayling, where my boss, Sandy Thompson, took a bite out my rear end each day (still had lots of junk in that trunk, so it wasn’t all it could have been). I looked up Dymph (we are close friends) and found out she was the patron of fits and seizures. That works for me, I thought. Where she held a book, I perched my business cards. And, she fit in very well there, just as I thought she would.

Through the years I dragged Dymph to 3 dioceses, 2 software companies and a magazine. And… she fit in!

These days of unemployment, she still fits. Dymphie, over here. I cannot find my car… Where are my keys? (sigh). 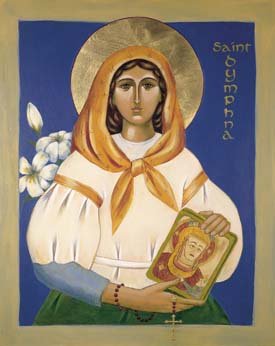 You can learn about this sweetie saint at www.bridgebuilding.com/narr/kbdym.html. Poor thing, lost her head. No, I won’t digress into “head over heels” sick jokes. No. Really.

Oh, this is where they are. Silly Vicki. ;o)

Permanent link to this article: https://vickisvoice.tv/2009/05/st-dymphna-pray-for-me-2/