About 9 years ago, Vicki introduced me to a most delightful person, Fr. Charles Irvin – better known as Fr. Charlie. Fr. Charlie is a priest of the Diocese of Lansing, Michigan, and celebrated the 50th anniversary of his priestly ordination several months ago. He not only served in Michigan parishes, but spearheaded a new form of diocesan communication – replacing the traditional Catholic newspaper with a high-quality magazine for the Diocese, sowing the seed for what is now Faith Catholic which offers communication resources to the Church throughout the United States.

I met Fr. Charlie after he had retired from full-time ministry. He is kind, witty, curious – and was born and lived in Ann Arbor,  Michigan, where I lived as a young ‘un. We are both graduates of the University of Michigan and love bragging about that with Vicki and her family who are diehard fans of intra-state rival Michigan State University in East Lansing. Most important to me, though, is that Fr. Charlie has regularly checked with Vicki over the last several years to see how she was doing handling her life with FTD. 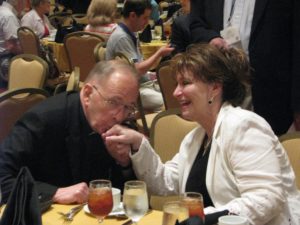 Fr. Charlie and Vicki at the 2010 Catholic Academy’s annual conference

Vicki has worked at Faith Catholic, and in 2010, at the Annual Meeting of the Catholic Academy for Communication Arts Professionals, was escorted to the stage by Fr. Charlie when she received the President’s Medallion, the organization’s highest award, for her distinguished career in Catholic Communications.

Thanks, Vicki, for bringing Fr. Charlie into my life!

Last summer Faith Catholic produced a video of Fr. Charlie recalling a few highlights of his 50 years as a priest. I’m wrapping up this post by sharing the video.

Permanent link to this article: https://vickisvoice.tv/2018/04/hi-fr-charlie/