I Came Back for a Little While…

Information for FTD impaired and their caregivers

A time for reflection on life: my Holy Week experience

Hailed as King, ridiculed as King, dying as a man, rising as our God, with the Father and the Holy Spirit

She was born the oldest of 3 children in a Catholic Italian family. She was loved in all the traditional ways, rich in the family’s traditions: festivals, family gatherings, playmates at school, parish involvement. She loved art, animals, music like all teenagers, but there was a shyness about her. During high school she became determined to be on the outside what everyone saw on the inside. She lost weight and bloomed in her senior year. As I thumbed through the newspaper, I identified with her struggle with weight, and self image so intertwined with that, to perfection. It was good to leave that cocoon behind, I thought.

Reading on, I was surprised to find that at 26 she had suffered hypoxic encephalopathy – a neurological injury caused by lack of oxygen to the brain, at first put on a ventilator, but soon able to breathe on her own, left with a simple feeding tube. They never would find out the cause. I became more engrossed in the story. It had been five years since that episode and there was no sign of improvement or having her come back to the life she knew. It had moved into the courts, two opposing sides, each maintaining her best interests. She was labeled as being in a constant vegetative state.

Years before, I had a son who was born with extreme hydrocephalus. The standard (Apgar) test for reflexes, swallowing, sight, alertness given to all infants was on a scale of 1 – 10, at birth, and repeated shortly afterwords. He had scored a zero, twice. He was on life support a short time, specialists flown in from around the country. When I awoke, I knew it was very bad. There assembled around my bed were my parents, husband, pastor, doctors, a social worker. There was no sound from the nursery. My son’s life was placed in our hands, to decide whether to keep him on life support, or be merciful, and turn them off. There was nothing in his brain that survived, except his brain stem. He couldn’t breathe, eat, was blind. His head was twice the size of a normal infant. He would not survive surgery. There was little hope that he could live a week.

He was received into the Church, and he was removed from all life support. And… he began to breathe on his own. We authorized a feeding tube, leaving the rest to God. He required constant hospitalization. One week stretched into a month, the months into years. He passed, naturally, 2 months shy of his 6th birthday. It was 1981.

It was now in the early ’90’s, and I am reading of this poor young woman, empathizing with her and a drama that is unfolding in the national headlines.

But life goes on, and I lost the thread to her life, with my everyday-ness. I accept a job in St. Petersburg late 1994, as a communications director for the Catholic Diocese. Moving from Michigan, a whirlwind of activities met me on the first day and only grew. One day at lunch a name is mentioned. Terri Schiavo. I was startled. I thought she had passed away. But no. She lived not far from my office. A court fight is about to take place to remove her feeding tube. This was to be the last attempt, after several other removals and re-insertions. 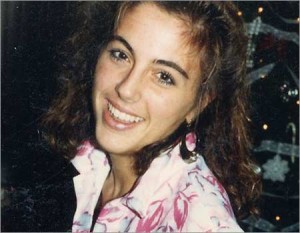 Going through the files, the court documents & church statements, I stumble upon the photo I saw in the news of a beautiful, laughing young woman, filled with life. And I look at the tapes submitted to the courts. Life had first smudged, then began erasing her unique features, as it had my son’s, and as it would with me. Her body was contorted by constricting muscles, dying nerves. Her peaches & cream complexion was now pocked by acne born of normal irritation. This beautiful young woman may have aged from 26 to 41 chronologically, but she looked ancient. “Terri,” I prayed, “if you are going to wake up, do it now.”

I lived and breathed her last days on earth. There was not a paper, tabloid, news vehicle or magazine that did not grace Terri on the covers of this event. No dignity. No privacy. Voices were conspicuously loud or silent. There was no middle ground. Protesters disrupted the quiet of the hospice where she was being cared for. Pseudo-friars ran the circus as much as the jugglers for life. I would drive by every chance I could. I took death threats for both sides, thousands of emails and voice mails overflowed the phone lines. And in small pockets, away from the cameras’ prying eyes, were small groups of our parishioners, members of religious and priests, compassionate visitors praying the rosary. Holding no signs, but maintaining a vigil. For some it was a daily pilgrimage for years.

I did what I could, but it wasn’t enough to give her dignity, to find a voice just for her, the silent woman, with the huge dark eyes. It was – without a doubt – the darkest time for me professionally, and as a mother and woman who identified with her in so many ways.

The drama played out for 14 days, slowly, painfully. People began fasts with her. It moved into Palm Sunday, and I felt like I was following the path with Christ, with Terri and with her family.

Five years ago today, Terri Schindler Schiavo breathed her last breath. Courts had denied both husband and her family mutual visitation during her death watch, even in her death. The circus would continue, but she was now safe. She was beautiful. She was whole. She had not gone to a better place, but I believe, the best place. No longer caught between life and death, court nor church, but free.

I didn’t know it, but I had already begun my own journey into dementia. And I have chosen to speak for myself, and on behalf of those who cannot. I don’t know how long I will be able to physically speak, but God has allowed me to write, but if I can provide dignity for those who cannot, then it’s a step I wish I could have made for her, and the thousands who face those decisions every day. I will only have good photos, good memories when people remember me. And, when it’s time, I will be clothed in God’s love, standing by the family I love, with Terri and my son.

To the family of Terri Schindler Schiavo:

You remain in my prayers. You keep her alive, you remind us how fleeting life can be, and to love and speak to one another about all things. May you find solace in the love that still connects you to your daughter, your sister.

One thing I learned was to have an Advance Directive (living will) prepared, another way to speak for myself. I have durable power of attorneys, I even have the grace of planning for my funeral. I have a will. I have good people to take over, when I no longer can. And I have the privilege of watching, mere days after Terri passed, the last days of Pope John Paul II, who taught us all how to live and how to die.

I want to thank the Florida Catholic Conference for the amazing work they did, storming the legislature, day and night, for keeping me on top of everything. Of all the unsung heroes in our US Catholic Conference who work for the marginalized, the wounded, poor, the elderly, immigrants and more. Your pioneering efforts, assisting our bishops in challenging issues, are the voice of the silenced.

Show your love for yourself and your loved ones, so that no more people have to endure what Terri did.

With love and blessings, Vicki 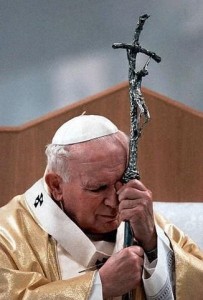 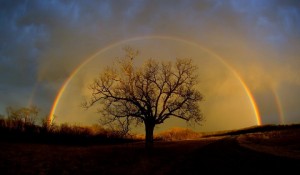 From the death of winter, we find life in spring. At the end of the storm, we seek a rainbow. Papa, are you listening? It's me, Vicki

Permanent link to this article: https://vickisvoice.tv/2010/03/a-time-for-reflection-on-life-my-holy-week-experience/