As a neighbor, I would grimace, covering my head with my pillows and quietly curse all the early morning people around the world. Besides the 8 nighttime visitors who would tiptoe in, and quietly say, ‘shh-h-h don’t wake up, just checking on you’, sleep was scarce enough. The roosters wouldn’t quiet down until 1:00 a.m.

The roosters had their own special style of things. There were clear, acrylic swinging doors on their rooms to let staff know if someone had attempted an unauthorized night or daytime stroll. Their wheelchairs and beds had alarms as well. They would be loud all day, these roosters! They would place their call button in one hand, pushing it repeatedly, with the usual “hello?” and then repeat and repeat and repeat. Jack and John were moved in together, since they were the leaders of the pack, setting off commotion, making staff scurry to attend to their needs, and keep the rest of the wing settled down. The sound of call bells going off is contagious, as you would guess. Like when someone says, “I think I should hit the bathroom before we go.”

One night the two gents somehow got extricated from their beds, and with IV’s crashing behind them, low crawled under the doorway and were apprehended within minutes. Short-lived victory, I thought.

At that moment, I had to grudgingly give them some respect. If I could move at all, I might have joined them. Not knowing how far we’d get or where we’d go, but the need to be home overwhelming us all.

Once they, and now Charlie and others, became people to me, I liked them. During the day they would be wheeled into the hall, on good days they’d move around the corridors. On bad days they slept, looking like they were 100 years old and helpless. I know how it felt. With the prospect of what lies ahead sometimes escaping into the void that sleep brings was the only hope.

Jack’s wife was also there, on the other side with the Alzheimer patients. On good days they shared lunch, sometimes her room, sometimes his. Jack was the flirt of the group, much to my pleasure! In PT and Occupational Therapy I would see them, as we all made weak attempts to have our unruly minds control our limbs. On the days that Jack was there, his wife was right beside him, squeezing a rubber ball between her knees as though it was the only thing that was on her mind. But when his eyes, grin or words suggested something more, she’d give him a rap on his arm, and he’d turn and say “I was just thinking about you, sweetheart”, innocent face betrayed by the grin he wore.

I came to know that John didn’t understand the call button, he thought it was a 2-way radio, so he would say “hello?” and wait for a return response. Not hearing one, he’d press the button, repeating his query, until someone came in.

Their pain was off the charts. The unfairness of nature laying down multiple diseases and distress on already condemned people will always eat away at me. Alzheimer and dementia patients with diabetes, Parkinson’s, cancer… Charlie seemed to have days he could not wake up, other day’s I see him in the hall, smiling a sweet smile at me. “You’re looking perky today,” I’d say in PT. I noticed daily how his recent amputation just above the knee went from raw, to red, and was beginning to look like healthy flesh again. And then there was the day of the prosthesis, and new sneakers. His eyes were dulled.

Another had a long ago amputation, and now was mourning the loss of his ‘good’ leg that had survived the War, and would give no eye contact. At night, in his parked wheelchair, you’d find his new shoe with it. When is enough, enough, Lord?

Louis had a new stroke on top of advanced Parkinson’s. When I’d get a cold glass of water during therapy, his eyes would beg, his left hand would point shakily at me. I rolled over to the bottled water, pouring him a short one. Just as I was going to hand it over, a therapist intercepted it. “He can’t have it! He will aspirate it.”, and she brought him back thick water. His scowl told it all. She tried to help him take a sip, and he kept his lips sealed, turning his head away. With everything he had been dealt, all he craved was a cold glass of water.

Now that I knew them as neighbors, I listened at night to the conversations they would shout out. The night they low crawled out, they were under fire, trying to help each other out of harms way, blood from their pulled IV’s ignored; they were enmeshed in World War II. In fact, all my neighbors across the hall were reliving those traumas they had been able to keep sealed away. But pain or dementia was unleashing this Pandora’s box, best left locked.

On this Veterans Day, I pray for those who are trapped in the nightmares they had so long put behind them. If your parents or grandparents who served in our armed forces are still alive, dialogue with them now. Pray they are never locked in the isolation of their minds, to re-fight the battles alone. Just pray. 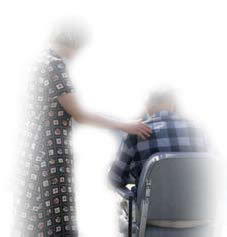 There was something beyond words, when I eavesdropped on the reuiniting of husband and wife at Heartland Healthcare. Choked me up, and made me see myself in years to come. He called on his 2-way radio, he hollered for help for his comrades. He low crawled into enemy lines, leaving a trail of blood with each exertion. He repeated it over and over and over. And then, on no particular day, he was back and he would smile at me. 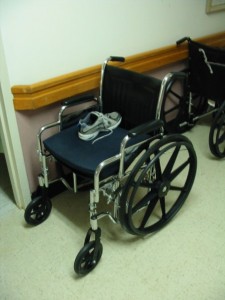 He coped with WW II. He learned to walk with one leg while raising a family, earning a living. He pushed all the nightmares of his war into a place he felt nothing could penetrate. And then, he aged. Diabetes set in, and unceremoniously, with no parade, no Son of War banner in the window. This was his reward.