I’ve been visiting Vicki for a few days. When I arrived, Vicki was having one of the best days she’d had in quite a while. I haven’t seen her with this much energy in a long time. She told me she’d had a great visit with her daughters the evening before, and was enjoying a visit with a very good friend she hadn’t seen very often during the past 8 months. Vicki was doing great. I was happy to see Vicki so happy and energetic.

The first day I was here was like going back in time to when Vicki was doing so much better. But from that high point she quickly crashed to the worst I’ve seen her. She was completely out of energy and has stayed in bed virtually 24/7 for the past few days. She’s had several strong episodes of Dystonia – the worst I’ve seen yet.

Vicki’s home isn’t large, but with air conditioners and fans running, it’s hard to hear from one part of the house to another. So, strange as it might sound, we sometimes send text messages if we need something. The other day I was using my computer in the dining room when I got a text message from Vicki – but I didn’t understand it. I replied “???” – here’s our conversation:

Oh, I suddenly realized, I’d better check on Vicki. It turns out she texted me in the midst of a major Dystonia attack and needed her medication. But because of the Dystonia, she couldn’t do more than use her elbows to write a text message. I gave her the medication and stayed until the attack ended. Then Vicki went back to sleep for many hours.

This has been an eye-opening visit for me. I’ve seen Vicki go from the best she’s felt in a couple of years to complete exhaustion and major Dystonia attacks in less than 24 hours. It’s made me think that living with Frontotemporal Dementia (FTD) isn’t just like riding a roller coaster – it’s riding the most Extreme Roller Coaster you can imagine.

Actually, I can’t imagine taking such a ride. But Vicki’s doing it – and I’m blessed to be with her at least part of the time. 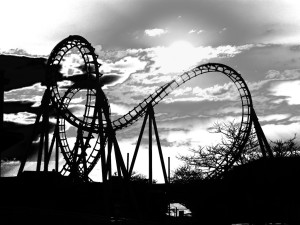 Permanent link to this article: https://vickisvoice.tv/2013/08/elbow-texting-call-for-help/