Other Voices: A year of loss, lessons and blessings to share…

One could say I’ve been away a long time, and I have.

Computer was down during the holidays, and that was great, being with family, my amazing family, then the equally amazing friends who stopped in during that time. ;o)

1/1/11 My children surprised me with a Morkie – Maltese/Yorkie – a funny little guy about 2 lbs. Smart, too. ‘Way smarter than I it seems. The more I ‘pup’ protected the more he found ways around it. One evening I attempted to turn on my computer to bask in all my birthday wishes. After 7 minutes, it dies. Turned on the lamp. Nada. The radio, not so much. Cell phone, followed by land line. Some shaggy 3# pup sat, head down, looking like he’d just lost his only friend. Holding all the chewed cords, I thought he might be right. Oh, ok, he was never in much trouble. But it took weeks to replace all the chargers. But in the meantime I fell in love with just watching this goofy puppy, now named “Lord Beanni Frizzlebottom”. Watching him grow, chase his tail, seeing the world from my shoulder…

And then I became afraid of turning on the computer. Bad sign. But on this freezing, quasi Spring day, with the B’s presence and fortified with Jesus, I thought I’d just take a try at it.

Love & Blessings to you all.

Papa? I’m finally back, Vicki oh! and the Beanni 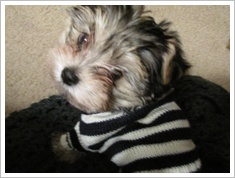 Permanent link to this article: https://vickisvoice.tv/2011/03/merry-christmas-happy-new-year-happy-valentines-happy-st-patricks-presidents-mlk-and-many-happy-birthdays/