Day 3 of destructive thoughts planted by my doctors …

WHO has the right, aside from Papa, to tell us how long we have to live?! If not the Republicans nor Democrats, then who?

A doctor who skims the notes, flips her hair (but in a perky way) and dismisses all the tests by other Neuro/Psychiatrists as “nonsense”? I think not.

A Cancer specialist who, after reviewing their opinion, says “I’d say 2 – 8 months.”

I love the Cancer Centers of America ads where they look at a woman with a terminal-only cancer, and tell her “when you came in, we didn’t see any expiration date on the bottom of your foot.”

We need more physicians like them, who know attitude overrides all medical statistics.

My mother had lung cancer that had metasticized to her brain. Hopeless, one doctor said. We met with many ‘experts’, but only one said, “Bevvy, there are those who say you have a few months to live. But I see a strong woman, willing to defy both heaven and hell. I’m betting you will have a longer life than that.” And that described my mother.  Determined, love-filled, committed to the those she cared for on a daily basis: the parish priest, the parish office, her husband’s cousin, Wanda; her husband of course, without a doubt her daughter and grandchildren, now without a father; her mother, her best friend Marge, whose husband was battling lung cancer… so many more.

And she did. Because of seizures she left the Subaru in the driveway, and at 7 a.m. she walked to the church, declining a ride. She took in the Mass stipends, washed the clothes, walked to Rochette’s for groceries, vacuumed the rectory, ran to the office, did her work there, walked home with honeyloaf for Dad’s lunch. She didn’t as for anything. In fact she remembered the same walk from Chestnut to Michigan Avenue, to Peninsula, the same route she took as a teenager. She listened to birds, she journaled, she took time to smell the lilacs and the Mock Orange. I never heard her complain. That was in 1982. 1983 came and went.

And one day she took on too much. On Thanksgiving Day, she went to the rectory – with no one knowing – to gather up the laundry. And she fell off the bottom step. Her leg broken, she had a flight of 5 porch steps, and 2 steps and then to drag herself up to un-lock the door. Dad didn’t know where she was, but figured she was working at the rectory. Between stuffing the turkey, we kept calling the rectory, but got the pastor’s answering machine.

We were idiots. Just kept calling, leaving messages. Bev was so independent. Finally, worried, I retraced her steps. She was in the lawn, which was frosted. Sobbing. She told me, frost on the steps, she slipped. She had tried pulling herself up the steps, but the pain left her there. Then she took all her strength, pulled herself up, inserted the key, passed out. When she got to the phone, all our messages clogged her ability to reach us.

She figured her best bet was to go back into the yard. And that’s where I found her. Dad had driven by, no sign of her.

We took her to the hospital. She had broken her fibula in 2 places. But that was just enough to awaken the treated cancers, and they ran rampant through her body. By January 28th, her life was fulfilled on this earth. She did it with aplomb, with humor, with grace. And no regrets or recriminations. And she had gone from their 2 mos. guess in 9/81 to 1983. Without the fall, I bet she’d have gone even longer.

Attitude. Brassiness. Balls of steel. My Mom. And I hope I live and die like she did. That would be the best I could hope for.

Love you, Beverly Roseanna Therese Peterson Wells. Could use a little help here. You were only 53, I am an old 61. xxoo

Papa, you listening to us?? 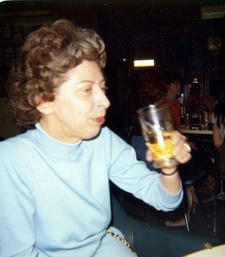 She would drink to this! And I with her. I think this was my wedding … aawwwkkk! She knew more than she let on.

Permanent link to this article: https://vickisvoice.tv/2010/09/day-3-of-destructive-thoughts-planted-by-my-doctors/