The Future is What You Make It ….

A Friend’s Thoughts about Vicki and Her Voice 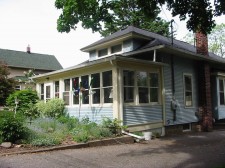 In those sultry summer days of 1958 this bungalow was white with black trim. No flowers, with 5 kids no time. With 15 neighborhood kids, no grass either. The front porch was off limit for us, a sanctuary for the grown-ups. Ed kept his 45 rpm collection out there, including an extensive Peggy Lee and Eartha Kit library. The songs and the photos were NOT for children's eyes & ears. The windows didn't have screens, so it was mostly too hot to want to play out there anyway. But we would enjoy the hot nights upstairs when we were supposed to be sleeping hearing Eartha puurrrr-rr-r her way into our dads' ... hearts. And peeking at them dancing through the grate, or sneaking down the stairs.

We lay stacked like hotdogs on a roller grill – there was one tiny window in the Rutkowski bungalow on Bridge Street, and at the back another over looking the backyard. Not a breeze blowing. The girls’ room faced the West and it had been warming up all day. Between the rooms was a floor grate, where any warm air that couldn’t climb the stairs, could rise unencumbered. The rooms were tiny, really just alcoves. Rick & David had 2 twin beds, the stairs. An arch separated us. We had 2 twins, side-by-side and a baby crib, the family dresser and Sparky the dog. Linda & I were the oldest so the younger two got the doorway beds. We’d roll, synchronized, just like those hot dogs trying to find one cool spot on the pillows or sheets, but with bodies touching bodies, we just slow roasted. The babies had their dark hair plastered against their heads, dead to the world. We flipped with our heads at the foot of the bed. We moved to the floor. We punched, fluffed, shook the bedding. Nothing. Just hot and sweaty. With hair that made me look like a shampooed French poodle.

My mother had become the Queen of Toni Home Perms that summer of 3rd grade, rolling those pink perm rods so tight if you blinked they popped. With my thick, coarse hair she’d always ‘leave it in, just a few more minutes for good luck.’ Well, it was luck all right. If they’d had picks back then I’d be the first French Canadian/Dane to have a ‘fro. A BIG fro, with big ‘fro bangs. As long as I was sweating bullets, we wrapped my hair flat with Mrs. R’s chiffon scarf, in the hopes if would lie down.

On the floor, whispering we talked about everything 9 1/2 year olds talk about. Uggy Stephen Nowasacki with his pockets o’snakes, hunky Ronald Meyers. How Mina Sonfalippo got to wear paten-leather shoes – ‘those girls’, our yucky brown wool uniforms. Somehow, just before dawn, the whispering became muted, and 2 little girls in baby doll pajamas fell asleep… 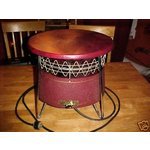 Search as I might, I couldn't find a maroon hammock fan! Imagine that ;o) They are called 'hassock fans'. These are the high end babies. Wish I could remember the big aluminum wonders. A Cincinnati friend was blessed to have one. (Does jealousy rear her ugly head??) Imagine for 51 years I thought they called it hammock. In my dreams God said "duh". lol

Why was it back then no one had more than one fan for the house? It might be a tiny window fan or one of those plane propeller professional jobs, but only one. My dad bought a maroon hammock fan, finally breaking down that summer, having survived nearly 10 muggy summers in our New Moon trailer. I’d never seen a hammock fan. A stool with a fan in it. Do you sit on it? Put your stinky feet on it? Proudly he placed it in the middle of the living room, stringing extension cords together as a frowning Mom looked on. Clicking the switch to high, it began to wind up, ready for take off. And, a breeze hovered around our ankles. Dad’s face glowed like he’d invented the steam engine, and in his own way he had. As we played out his rules of operation “blinds shut, doors closed, windows down” we began making an indoor sauna with ankle breeze.

Mom, never a shy flower, began her own plan of attack, err… operation. Dad would leave for the Armory at dawn, Mom would pry open the now swollen window, take out the screen, and lift that maroon baby into the window, sideways, blowing in. We would bask in the breeze, drinking lemonade and watch the soap operas. When Soupy Sales came on it marked the 1/2 way point. After The Guiding Light, we’d put the fan in the midroom position, close the window, pull the blinds waiting for Dad to pull into the gravel driveway. With an “Isn’t this just the best??!!” look on his face, we’d smile innocently, as the sweat began poofing mom’s and my matching Toni poodle cuts. This worked well until dad came home early one day. Caught.

Mom said “I made chocolate chip cookies” heading for the kitchen. I was intent on my paper dolls. Not missing a beat, dad turned the fan to blow out. Which made me think ankle breezes might have an appeal after all.

So now, with a new operation manual, she turned it blowing in, he turned it blowing out. Finally, I just said the obvious. “It’s HOT in here!!!” A cranky child can perform miracles. Taking out the weird hammock fan, dad removed the top, exposing it’s BIG blades, and voila! We had a fan! And a compromise. Nights, it sucked out. Days it blew in.

Until the day they died, they had that one fan. The Hammock Fan. I forget whether it blew in or sucked out, I just worried about my babies’ fingers. 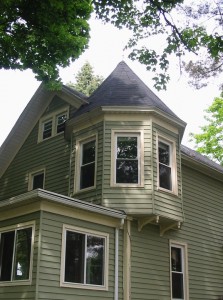 The Kaminski's 7 kids lived next door. The house was blue and big. Not much furniture, some keen cement block & wood bookcases. I was an only and an object of curiosity. My stash of dolls boggled their minds. Their little brothers poking the dolls' eyes out boggled mine. Life is like that. 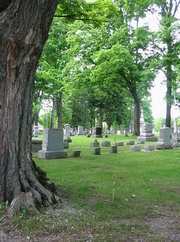 One door over was the cemetery. Our favorite hide-n-seek place, a great place for flowers for moms when we came back too late. Same place is only 2 blocks away now, and I thought I heard giggling behind the tree as I scooted around at dusk. 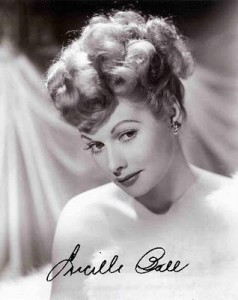 Voila!! the famous "Poodle Cut" for you younguns. But picture it with a 'fro look, being 9 years old and poofs 3x as big. Our family put the "fun" in dysfunctional, my mom used to say. Darn if she wasn't right!

Permanent link to this article: https://vickisvoice.tv/2010/05/one-hammock-fan/