The Importance of Walking 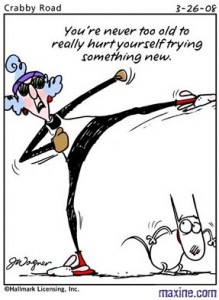 Ain't it the truth!

Walking can add minutes to your life. This enables you at 85 years old to spend an additional 5 months in a nursing home at $7,000 per month.

My grandpa started walking five miles a day when he was 60. Now he’s 97 years old and we don’t know where the hell he is.

I like long walks, especially when they are taken by people who annoy me.

The only reason I would take up walking is so that I could hear heavy breathing again.

I have to walk early in the morning before my brain figures out what I’m doing.

I joined a health club last year, spent about 400 bucks. Haven’t lost a pound. Apparently you have to go there.

Every time I hear the dirty word ‘exercise’, I wash my mouth out with chocolate. 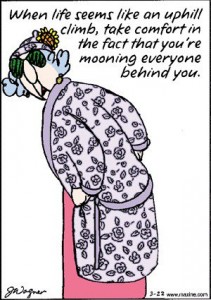 Ah, Maxine exemplifies how I feel about my scarred experiences climbing the steps, and why some leaders are born.

I do have flabby thighs, but fortunately my stomach covers them.

The advantage of exercising every day is so when you die, they’ll say, ‘Well, she looks good doesn’t she.’

If you are going to try cross-country skiing, start with a small country.

I know I got a lot of exercise the last few years … just getting over the hill.

Every time I start thinking too much about how I look, I just find a Happy Hour and by the time I leave, I look just fine.

We all get heavier as we get older, because there’s a lot more information in our heads. That’s my story and I’m sticking to it.

You could walk this over to your friends but heck, just e-mail it to them!

I remember being toted by my blue (or violet) haired granma Mimi to the Indian River Shrine “The World’s Tallest Crucifix” . It was HUGE, and there were 28 steps leading to the top of the hill. Each step contained a relic of a particular saint. Trouble was, the spiritually inclined would take the stairs on their knees, bowing, kissing the relic and saying a prayer, then pop up and struggle for the next step.

Picture me, say 5 years old, following a long line of granma behinds, 28 ahead of me, climbing, bowing, kissing, praying. It’s a memory I will never forget. Being mooned by those 1954 ladies in dresses, rolled down socks, girdle and corset ablaze, burnt into my mind. I think that’s when I decided the only safe place was to be at the 28th step. Year after year. ‘Be first and thou shalt moon all others behind you.” The motto helps me a lot today.

To learn more about The Cross in the Woods, Indian River, MI see their website www.CrossInTheWoods.org It really is lovely – of course I’m viewing it from the 28th step. ;o)

Papa, lead us through our fears and tears, to laughter. Aging is only for the brave, but living with those aging or with terminal illness, makes saints. “Life is too important to take seriously” has been attributed to Oscar Wilde and John Lennon. But they are words of wisdom. 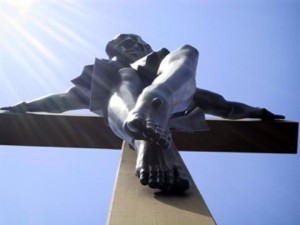 From below the crucifix it is a dizzying sight. Not to take away from it's startling dimensions, a number of years ago we visited the Shrine with staff from St. Mary's, Grayling. Anne Dole had her 3 yr. old boy with her, who at this position looking up, excitedly shouted "Look, Mom, I can see his penis!!" Blushing Anne tried to shoosh him. But he kept pointing and saying "Look, look right there!!" So, awkwardly we looked up under Jesus' skirt and lo and behold there was 'something' up there. As we examined it more closely it was a giant wasp nest perfectly positioned. We hurriedly ran down the steps and exited to the gift shop. We reported the wasp issue to the friars, so they could fix it. Still hear their laughter ... 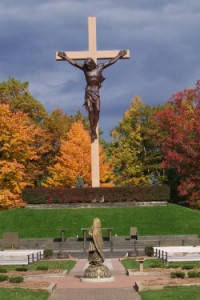 Certainly there is a reason, besides the ever changing seasons, we Michiganders like to call our state "God's Country". While you cannot see the stairs the are to the left of the image, and it is a long, long trip for the old shins. 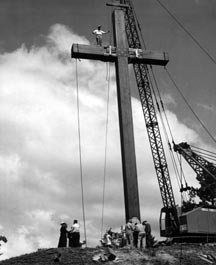 The wood was seasoned during the winter of 1954. It was then sanded, polished and fitted with an iron jacket or base. The base would be fastened to bolts in the concrete and steel foundation that had been buried in Calvary Hill. When the two redwood pieces arrived at the Shrine, it took two days to assemble the Cross. On August 5, 1954, hundreds of people saw McCready and Sons of Gaylord and William A. Porter, contractor, of East Jordan use their cranes to lift and place the Cross on its foundation. The larger crane had a 70 foot boom. Lifting and placing of the Cross took only one-half hour. A crew of workers tightened the nuts to secure the Cross on Calvary Hill. Wood was taken from a 2,000 year old Redwood tree in western Oregon. For information on Marshall Fredericks, the sculpture, see www.MarshallFredericks.com 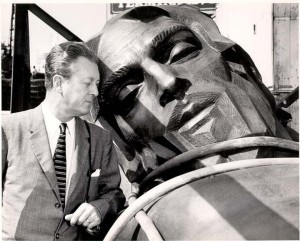 http://www.svsu.edu/mfsm/biography.html Marshall Fredericks, noted sculptor, has his museum at Saginaw Valley State University. He was noted not only for the crucifix at Indian River Shrine, but for the Spirit of Detroit, for the Viking in us a number of Norsemen projects, and many more.

Permanent link to this article: https://vickisvoice.tv/2010/04/the-importance-of-walking-2/