There once was a gal with Dystonia

I had begun my new year on 11/6/2009 so I just chilled out about the Big Night. A good friend stopped by with the remainder of some champagne so I could toast the New Year. “Chin, chin” as Tony would say.

Resolutions: none. 6 mos ago when I heard my diagnosis I kept propelling myself ahead to frightening options. Then losing a few months with surgery, I fretted about precious time being wasted. Somehow, through prayer or a miracle, I get up each day, throw a prayer up at the ceiling, groan, and roll out of bed.

… I am amazed I was even able to work for the last 4 years! The day slips by so fast now, and I might have only eaten a yogurt, read 2 emails, listened to the Today show, and sometimes that’s the fruits of the day, until I give God a shout-out and fight to try to sleep.

My son, Peter, had hydrocephalus and spinabifida and other serious issues, requiring hospitalization for the nearly 6 years of his life. His brain stem was all that sustained him, but even with those primitive responses, God found a way to shelter him. When under seige his body would go into hibernation, until he could move back into his routine.

I suspect I am experiencing my own hibernation, and withdrawing seems to be my coping mechanism. 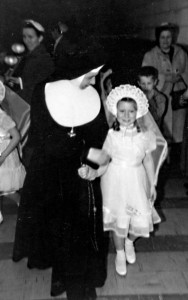 One day at a time. Just the nature of aging magnifies the preciousness of time. I recall as a child thinking living would be forever, and I would somehow escape aging. Risk taking is not just for the young, I now realize. Many wake up each day and say "God, this is not how I thought I would live this chapter of my life." Hang on, Vicki, it's gonna be a bumpy ride. But I'm not alone on the trip.

Permanent link to this article: https://vickisvoice.tv/2010/01/journal-musings-new-year-2/