This is Jim writing (I don’t want you to blame Vicki). I love to drive! Growing up in metro Detroit I was immersed in the auto industry – Detroit was the Motor City. I’m not a “car guy” who can fix things under the hood, but I am a “driving guy” who has changed my oil and tires from time to time. 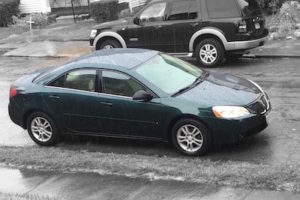 It’s been an unusual summer for me because of two emergency eye operations I’ve needed in June and August. Since I’m still in recovery, I haven’t been able to drive – and it’s driving me crazy! My biggest disappointment is not being able to drive the few hours to Vicki’s for a visit. We stay in “touch” via text and occasional phone calls, but it’s not the same.

I lightheartedly titled this post Parallels because Vicki and I are having similar experiences, one of them being eye surgeries. The timing’s a bit off – I’ve (hopefully) finished mine and Vicki’s should be happening any time now.

A second similarity is that my car battery has died a couple of times since I haven’t been driving. It’s a minor inconvenience except when someone needs to borrow the car. Vicki’s car battery troubles must have found me.

Please keep Vicki, her family & friends, and her health care providers in your prayers. Join me praying that her medical procedures and recovery go well.

Permanent link to this article: https://vickisvoice.tv/2016/09/parallels/