Caught Up In The Meat loaf

For 4 years I have won the battle with FTD (Frontotemporal Dementia) and, all things considered, including all the potential threats, I’ve had a good four years.

But lately, Papa, I am afraid. Not like when I had spiders coming out of the ceiling light, or thought so. Not like ‘how will I live now that I am fired?’. No. It’s something new. Something ‘different’.

My friend came over last night. It was a great day, and even better with her here. I know we had something pass in conversation that was exciting to us both. We even continued on the phone later. And today, it’s all gone.

I was hungry all morning, but I didn’t want to use up the meat loaf my friend brought over (so delish!). And so I stayed in bed, entertaining my new, persistent migraines but unable to get up and just eat something. A piece of toast, a slice of cheese. But I was confused, caught up in the meat loaf.

My daughter & I were going to see our friend, Troy, in a play at Central Michigan University tonight. I was totally up and revved to go. Yesterday. Today I was weeping, practically begging my daughter to not come over. But Bep came by, bringing some groceries. And when I met her in the kitchen, starving, I looked at my stove. There was some kind of cabbage concoction with the meat loaf. The meat loaf! MY meat loaf! 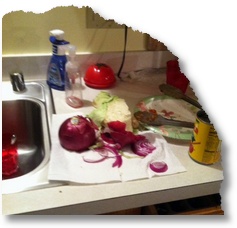 I looked at my daughter, who was puzzled when I broke into tears. “I don’t remember making this.” It was still warm. The aroma heavy in the air.

This isn’t the first time. But it’s gotten me fearful. Not of dying, but how quickly things could turn, and I disconnect. Altogether.

Permanent link to this article: https://vickisvoice.tv/2013/10/caught-up-in-the-meat-loaf/