Saturday Night at the Movies… 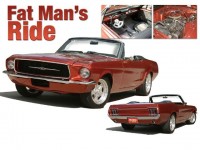 Del Shannon .. The Beatles ... Joan Baez and Peter, Paul and Mary, the wind trying to defy my frozen stiff with hairspray and Dep laden coiffure, wrapped in a chartreuse chiffon scarf. Nothing could stop me, no one was gonna let me down ...

It was 1967. Dad had the biggest, baddest 68 Mustang Convertible WITH 8 track! Copper finish, cream leather interior. it was raw with sexiness. Not unnoticed by the football team, mind you. After work, on Saturday’s at the Grayling Restaurant, sometime my dad would come, switch cars with me (he got the green Opal from God knows when) and when I turned off the lights, and locked the door, there would be my dream car. I’d quickly put in my 8 tracks of choice, often something from Bobby Darin (oooh Mack the Knife), Bobby Vee, Ricky Nelson, the Turtles (Turn, Turn, Turn), and “Run, run, runaway” by Del Shannon. In the passenger seat were my cool clothes, capris, tank top, matching pointy shoes and chiffon scarf.

Quickly running back in, I became my teenaged self. Hopping back in the car, alive and feeling fresh even with 10 hrs waiting tables, the beat from the stereo began my feet moving, fingers tapping and the rhythm flowed from my toes to my head.

A couple quick turns on Main Street (‘draggin’ the Main’), honking and laughing with classmates in all sorts of vehicles. I’d usually snag a gal friend and then after driving all 6 blocks, headed for Spike’s Keg o’Nails on ‘special Saturdays’ or on to Curley’s or Days’ Drive-in. And if it was a Spike’s night it would a burger and a vanilla coke, thowing dill pickles at one another, pretending to ignore the boys. 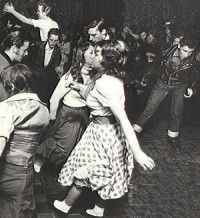 Jivin', doing the Twist, the Hustle and Mashed Potatoes. It was a time when anyone could dance! I had the first Mary Quant mini-skirt, my Vidal Sasson hair cut, but some great penny loafers and cords. "and a 1-2-3 twist, a 1-2-3 jump ..."

Then some brave couple of gals would sink some nickels in the juke box, and soon the tiny dance floor was beckoning other gals. Eventually, a sheepish boy friend would grab his ‘steady’ and more nickels fed the box. Bliss.

Fast forward to 2010, and you will find me vegetating. But tonite, with the air crisp, and the stars like diamonds, I decided at 11:00 pm that I was hungry and needed something to eat that wasn’t a cold ham & cheese sandwich. Brace on, rangy hair in a pony tail, requisite magazine for lone diners, I grabbed my cane, and slid into my Mazda. Again, I made the whole 2 blocks in minutes with the Shandells blasting, windows down.

As I parked in the handicap spot, I heard the music from the sidewalk. Entering the redwood tavern, I was greeted with a blast of jazz played on the electric guitar. And singing. The smoke had calmed down at this late time, and there were maybe 10 folks there. Within minutes, we began a rapport with the musician, cat calls, bad jokes and one-liners. After keeping up with them with my bawdy sense of humor, I was still dubbed “the Nun”.

For 60 minutes I was unaware of my bustier or sitting on my cane. I was Miss Grayling, swaying to the music. It was 1967, with an amazingly full life to be discovered. Whatever was left of brain was having a great time. I had recovered the Pony, the Boogaloo and the Hitch Hiker, and the clean wood floors for awhile were covered in sawdust and peanut shells.

It’s good to be alive. Thanks, Papa. 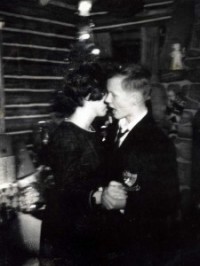 Everything about my youth was interwined by the AuSable River. Here is my first boy-girl dance party, with handsome Jack Mason, whose family helped define what making love to the Goddess AuSable was all about. May he RIP, but I kinda thought I saw him tonight. 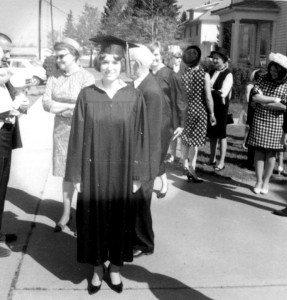 A darned good year!! College at Moo U was coming up, got a full 'ride' at their experimental Justin Morrel's College, to study humanities and speak Russion while we studied abroad for 2 years. Life threw some curves, but good ones, and now I'm trying to figure out how to play this final one.

Permanent link to this article: https://vickisvoice.tv/2010/04/saturday-night-at-the-movies/